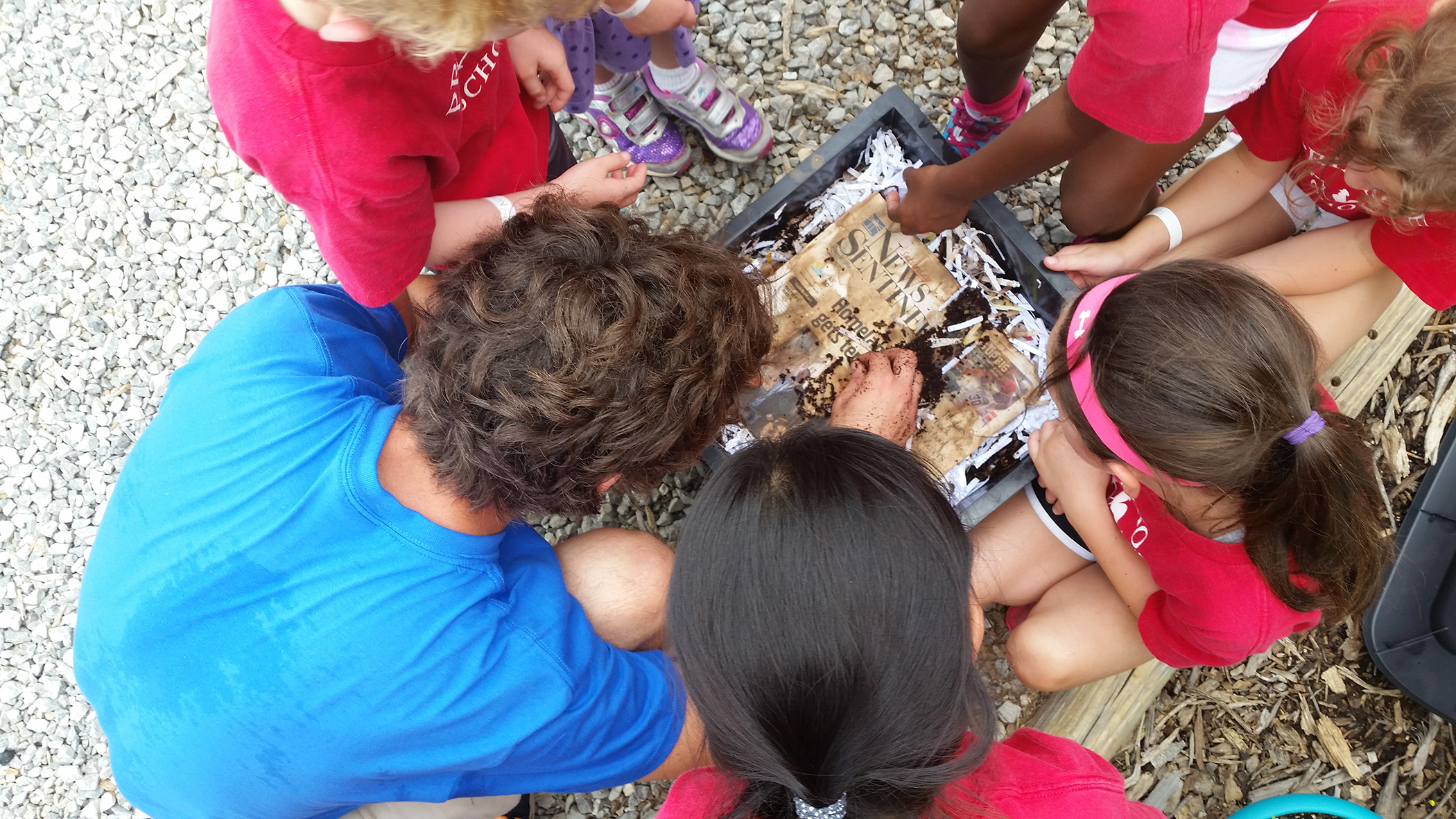 The Davis Family YMCA in Farragut, Tennessee, has doubled their community garden produce over the past 3 years.

The Davis Family YMCA in Farragut, Tennessee, has doubled their community garden produce over the past 3 years. What began as a project idea with a few raised garden beds has grown to include natural composting, hydroponic systems and 2 other YMCA locations. The Davis Family YMCA is over 162 years old. “It’s the 4th longest running Y in the country,” Kim Ballard says.

When Ellen Morar approached Kim about launching the community garden in 2012, Kim advised her to write a grant for the initial funding. The community garden received a $1,000 grant from Walmart to pay for materials and the first seeds.

“I grew up on a farm,” Ellen says. “But I had forgotten a lot of what I knew about farming. It was not as successful as we hoped it would be.” The first garden resulted in about 100 pounds of produce, which the Davis YMCA donated to after school childcare programs for healthy snacks. “It was a good learning experience!” Ellen remembers.

Ellen has been a part of the Davis YMCA for several years. What began as a membership turned into a part-time job that allowed her to teach Pilates and Spin classes. “I offered to help with the gardens because I was a part of the group that knew how to do it. Then it grew into a full-time job!” While her involvement with the YMCA initially began as a membership, it has now become a part of her life. “The Y is a great place to work with the community,” Ellen says.

In January of 2013, Ellen was contacted by an anonymous member of the community. After telling him about their small success, he offered to donate the knowledge and equipment to install a complete hydroponics system to the community garden. This would increase their garden produce while saving space and resources.

Hydroponics is an amazing way to grow vegetables using nutrient-rich water in the place of soil. Once the Davis YMCA implemented the hydroponic system, their produce for that year exceeded 1,100 pounds. As the garden grew, so did the community involvement. The Davis  YMCA included their after school students in garden activities. For the children attending Summer Camps, working in the garden is one of the most popular  activities.

“We bring kids out from school groups, or get children involved whose parents are working out for an hour at the Y. They are a great help!” Ellen said.

While the most active gardening seasons are during Spring, Summer and Fall, Ellen says even in Winter there is plenty of planning to do. “It is a full-time job. Not only is there planting, weeding and harvesting, but we offer Master Gardener Classes where residents can learn how to begin their own gardens.”

As the garden entered its third year at the Davis YMCA, Ellen and her volunteers expanded it to include 12 raised beds and 3 hydroponic systems. With the hydroponics fully underway, the 2014 community garden crop produced 2,200 pounds of produce, double the amount of produce from the previous year.

“Even people who cannot physically help us garden want to be involved,” Ellen says. “Now we offer classes for people to learn the difference between good bugs and bad bugs. They can learn if their soil is viable for vegetable growth. We can teach them how to grow a garden according to square footage, how to water and create their own compost.” What began as an idea and just 100 pounds of produce has now become a major highlight in the Farragut Community.

In 2015, Ellen helped to organize project-related work days to expand the garden. After building additional raised beds and installing more donated hydroponics systems, the Davis Family YMCA grew an astonishing 4,400 pounds of produce that they donated right back to the community.

“Several of our YMCA members are involved with local churches and helping with food pantries, so we knew exactly where the produce should go,” Ellen said. “We have 5 area food banks that we donate the produce to.” The Davis Family YMCA has a place where members can donate produce they have purchased, which involves members of the community who may not be able to help in the garden.

The Community Garden also receives items that may have passed their expiration date. “A lot of items from Walmart, Kroger and Trader Joe’s that have passed the consumption date, like bagged salads, go directly back into our compost bin.”

The Davis Family YMCA is also involving local Boy Scout and Girl Scout Troops in the community garden. “Two Eagle Scout Projects involved researching and growing plants that are native to the area. They have also researched pollinator gardens.” In addition to gardening and generating compost on site, the community garden houses two ‘Bee Hotels’ to help with local pollination.

Last year, Ellen and Director Pam Williams expanded produce donations to children in the area who may not always get fresh fruit and vegetables in their diet. “The idea was to teach them how to use vegetables in all their meals,” Pam says. “They enjoyed it, we enjoyed it! We made zucchini pizza, cucumber sandwiches and kale smoothies.”

“We gave them plates that show good portion control, they are divided into fruits and veggies, proteins and grains. They also got seeds to take home and watch them grow.” Ellen, Pam and the Davis YMCA served over 400 children in the community last year.

Pam moved to Farragut from Louisiana with her family back in 2003. “I missed my family, I got involved with the YMCA here and began taking classes. Then they asked it I would be interested in part-time work, so I did. It was the perfect fit for me,” Pam says. “It’s the perfect job, what it stands for, and what it does. I’m very fortunate to be able to work here.”

With over 500 volunteer hours clocked in the community garden last year, the Davis Family YMCA is certainly doing something right. Roughly 2,030 people attend the Master Gardener classes each week, which run from February through October on Mondays at 1pm.

Kim Ballard, who oversees several of the YMCAs in East Tennessee, is pleased that the community gardens are doing so well. She is working on implementing a hydroponics system on the roof of the Downtown Knoxville YMCA and has several beds flourishing at the Cansler Family location.

“We want to get the community involved,” Kim says. “That’s the whole idea. There are programs year-round for people of all ages.” In addition to the community garden and classes, a swimming pool with water aerobics and a fully equipped gym, the Davis Family YMCA offers line dancing classes, bridge tables, Mahjong tables, youth sports including soccer and swim lessons, as well as hosting several home school PE sessions.

Looking forward, Kim and the community garden staff at the Davis YMCA are optimistic about 2016. With plans to grow the Alzheimer’s Core Group, Community Garden and summer camp attendance, it may be the biggest year yet. “We want to have a garden at each location and plan to add beds to the Maynardville and Bob Temple YMCAs.” Kim says. “It has been so successful and so well loved here, we have members who offer to purchase seeds and donate lights to start seedlings. Even though they can’t work in the garden, they want to support it any way they can.”

“Anything will help,” Ellen says. “The more the merrier!” The community garden is operated solely on donations and grants. Visit the YMCA website today and learn how to get involved. www.ymcaknoxville.org