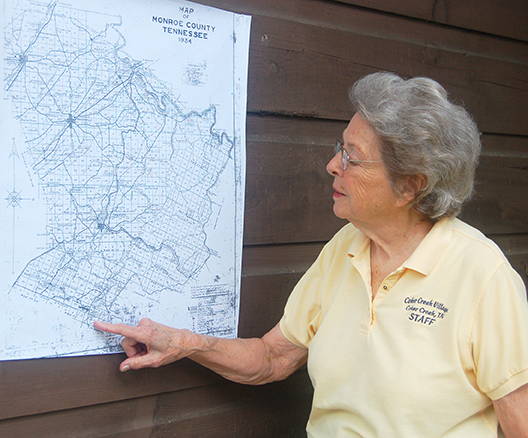 Back in 1959, Esther Gray and her late husband Sanford purchased an unusual bit of Coker Creek history. It wasn’t a nugget of gold, a pottery jar or an arrowhead, but a grave site.

Back in 1959, Esther Gray and her late husband Sanford purchased an unusual bit of Coker Creek history. It wasn’t a nugget of gold, a pottery jar or an arrowhead, but a grave site.

And it wasn’t just any grave site. This grave site was, and is still believed by many, to be the century-old burial place of Coker Creek’s legendary Indian maiden, Coco Belle.

History credits Coco Belle with trying to keep peace between the white-man and the Indians during the early 1800’s, before Coker Creek became a part of the infamous Trail of Tears. Over 4,000 of the 17,000 Indians died from hunger, disease and freezing weather during the 1838 and 1839 march out West.

It is said that Coco Belle made the trip several times to aid her fellow Indians on the long journey and to help them establish new homes upon their arrival out West.

But one question still remained: Is Coco Belle really buried in that immortalized grave in Coker Creek?

“We always believed that an Indian was buried there and it has always been said in the community that it was Coco Belle’s grave,” says Esther.

Today, the grave site is marked by stones piled waist-high in a wooded area on Esther’s property fronting Highway 68 in the middle of Coker Creek. The grave is situated on the side of what was once known as Hot Water Hill, but in more recent times has come to be called Coco Belle Ridge by adjoining property owners. Cabins and roads have been constructed nearby but the grave has remained intact.

When the Grays purchased the grave site in 1959, it was part of a 160-acre parcel the couple eventually turned into the  Tellico Mountain Youth Camp.  Records show that in the years before the Grays purchased it, the land had passed through the hands of three other families and one gold mining company.

There was already plenty of folk-lore surrounding the grave site when Esther and Sanford Gray made the purchase.  They were especially aware of the time-honored tradition of tossing stones on the grave and the consequences of removing them.

“The saying was that for good luck you throw a rock on the grave and for bad luck you take a rock off,” explains Esther. For their young, curious campers, the temptation was often too much.

“We had two or three instances where little boys didn’t believe it and they took a rock off,” she says. “They took one off and sure enough they fell down or scraped a knee or something and we reminded them of that saying,” she says with a grin.

It is not known where the rock-tossing tradition originated but it is said that Coco Belle herself may have made the request before she died.

Esther, now 86, says that while it was rumored that the previous owners of the property had allowed the directors of a museum in Knoxville to excavate the grave, she and her husband saw no evidence of that happening. “The stones were still piled on it when we bought it,” Esther stated.

Some historians believe that in her later years, Coco Belle married a white settler named John Coker and that she went by the name of Betsy Coker for the rest of her life. She and her husband are said to have started a small store in Coker Creek which catered to travelers on the Unicoi Turnpike, a popular wagon trail which ran through Coker Creek.

When the Grays sold a portion of the 160 acre tract 20 years ago, they decided not to sell the little 16 by 40 foot strip of land making up the grave site.  Esther said her late husband wanted the grave of Coker Creek’s best known Indian maiden preserved. “We were glad to have it and to be able to take care of it.” Esther said.

The Grays closed Tellico Mountain Camp back in 1988.  During the years since her husband’s death a decade ago, she has passed up the offers of those wanting to buy the grave site, fearing that the hallowed ground might be lost forever to roadways or home-sites.

Even today,  with the site of the old Tellico Mountain Camp property up for sale and the adjoining grave site to be sold with it, Esther is concerned about the grave. “I would like to see the grave site preserved and I hope that whoever buys the property will want to see it preserved too,” adds Esther.

For now, Coco Belle’s final request appears to have been honored. The stones remain piled high over her grave and her legend lives on in the little community of Coker Creek.