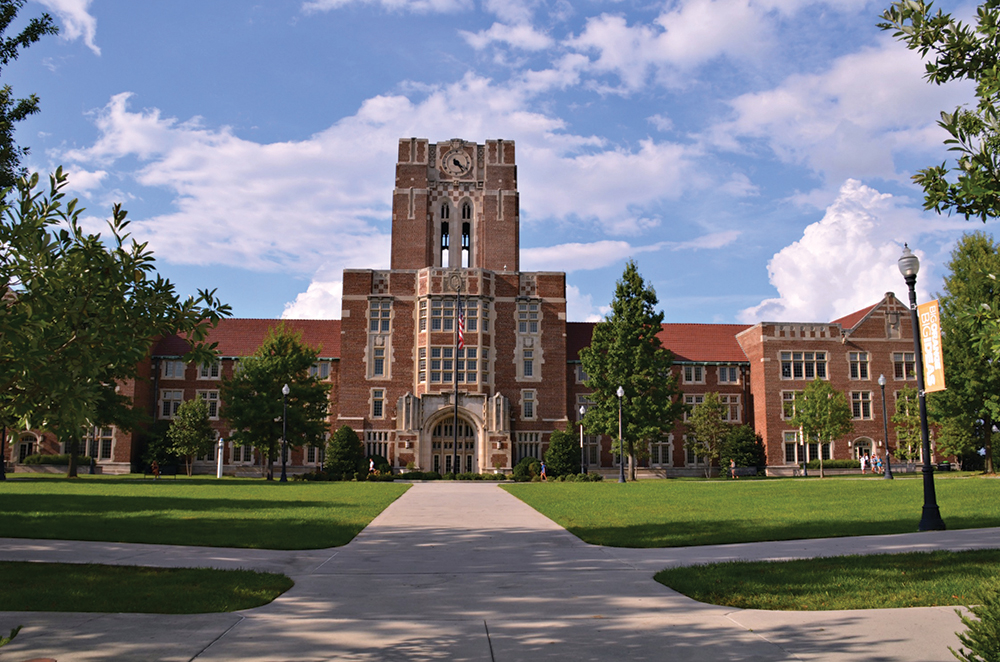 Many people across Tennessee, and beyond, recognize the first line of the University of Tennessee Alma Mater. The Hill, as it is commonly known, is enshrined in the hearts and memories of thousands of Tennesseans.

Story and Photos by Lon Shopman

Present day Knoxville began as a Fort, established by James White in 1786. When President George Washington appointed William Blount, Governor of the Southwest Territory, Blount came to White’s Fort and named it the Territorial Capital. White sold much of the land he owned and from it, Knoxville was formed with 64 lots.

About the same time, Samuel Carrick, a young Presbyterian minister came to the fledgling settlement, intent on establishing a college and a Presbyterian church. The college came first. It was established in 1794 and was named Blount College, in honor of Governor William Blount. The college was located at the corner of Clinch and Gay where The Tennessee Theater now stands. It was the twenty fourth permanent institution of higher education in the United States and the first that was not church related.

From the outset, Blount College teetered on insolvency. It attracted few students and only conferred one degree in a 13 year period.

In 1807 the name was changed to East Tennessee College, thinking that might help attract more students. It did not.

August 17, 1809, proved to be a fateful day. Samuel Carrick, the President of the school, and it’s only instructor, suddenly died. The Trustees developed a lottery scheme to keep the school open. They wrote to Thomas Jefferson seeking his support for their lottery.

Jefferson opposed the idea but offered advice which would shape the future of the institution. He counseled the trustees to purchase land outside the city, which would provide sufficient space to erect several buildings around a grassy square, and thus form an academic village. The trustees could not focus on land. They were concerned with survival. The lack of finances forced the closing of the college for the ensuing 11 years.

In 1820, East Tennessee College reopened. Remembering Jefferson’s advice, plans were made to relocate outside the city limits. In 1826 the trustees purchased “Barbara Hill,” for the new campus. The Hill was named in honor of the daughter of Governor William Blount. The 40 acre parcel of land was purchased for $600. It was located between the river and the Western Road. The views from atop The Hill were breathtaking in every direction. The site soon began to be referred to by locals as “College Hill.” In 1828, the first building was erected. When construction began, the workers dug into a cemetery that no one remembered existing on The Hill. The first structure was built of stone and brick, with an observatory and belfry. The ten room building would become known as Old College. It would be the landmark by which the university would be identified for the next 91 years.

In 1861 cannons thundered at Fort Sumter, South Carolina, marking the beginning of the Civil War. Within six months, the Confederate army took possession of Knoxville and The Hill. In time the Confederate forces abandoned Knoxville to be a part of a major battle shaping up around Chattanooga. When the Confederates left, Major General Ambrose Burnside led Union forces into the city. He immediately began to build fortresses all around Knoxville.

The Hill was designated as Fort Byington. Having won a major victory at Chattanooga, the Confederate army turned its attention back to Knoxville. General James Longstreet laid siege to the city, November 23, 1863 and lobbed cannon fire at Fort Byington and other Union fortifications. Six days later he launched an ill-fated infantry attack on Fort Sanders. The Union forces had dug deep trenches around Fort Sanders. The Confederates failed to realize how deep the trenches were. Once in, they could not get out. The Battle of Knoxville lasted 20 minutes. Eight hundred and thirteen Confederate soldiers lay dead in the trenches. The Union army lost only thirteen men. Longstreet withdrew to join Lee’s Army in Virginia. Knoxville remained firmly in Union hands. In time, the war ended.

The Civil War left The Hill in shambles. Every tree on the campus had been cut for firewood. Deep trenches had been carved into The Hill. Longstreet’s cannons had taken their toll. Buildings had been heavily damaged. The Hill was left desolate and all but destroyed.

When the war began, Thomas Humes was rector of St. John’s Episcopal Church in Knoxville. He was a staunch Union supporter. When the war concluded Humes was named President of East Tennessee University, and given the daunting task of rebuilding the University and its campus. Because he was a known Union supporter, he was looked on with favor when he requested government funds to repair the damage left in the wake of the war. Subsequently, a United State Senate committee noted that East Tennessee University was deserving of funds to repair the campus since it was the “only education institution of known loyalty in any of the seceding States.” A bill was passed providing $18,500 to help repair the war damage.

At the same time, Yale University donated 100 elm trees to the University to be planted on The Hill as part of the reconstruction. Those trees remained until the 1950’s when they were destroyed by Dutch elm disease.

With war now passed, the fortunes of East Tennessee University turned. In 1879 the institution was designated as The University of Tennessee. Ten years later, students directed their attention to the task of selecting school colors. In those days, UT was a military school. Male students wore uniforms that were blue and white. At the same time, the baseball team was clad in red and black. Charles Moore, president of the Athletic Association, looked at The Hill and saw daisies growing profusely. He reasoned that the school colors should be derived from The Hill and the flowers that grew there. Moore decided that for the upcoming field day, he would dress in orange and white, the color of the daisies on The Hill. Soon, more and more students wore orange and white to athletic events. A vote was taken in 1892 to officially select school colors for the University of Tennessee. The students chose orange and white by a narrow margin.

In 1904, Dr. Brown Ayres became President of the University of Tennessee. He assumed leadership of an institution that was deeply in debt. The buildings were antiquated and overcrowded. Heretofore State funding had been virtually non-existent. It was vital that change, if the University was to thrive. Around 1917 he approached the State Legislature with the idea of erecting a great academic hall on The Hill. Uncharacteristically, the State appropriated the needed funds. In May, 1918 a Chicago firm of architects were employed to design the building. When it was announced that Old College would need to be demolished for construction to proceed on the new structure, an uproar ensued. The trustees were bombarded with angry letters from alumni. Finally, the trustees agreed to attempt to move Old College if the Alumni Association would raise the needed $15,000. In truth the 91`year old, 10 room building was no longer needed. Neither did it possess any architectural beauty. Only $2,000 of the $15,000 needed to move the building was contributed and Old College was taken down. Blanche Bingham, a sophomore from Bell Buckle, Tennessee laid the first brick in the new structure, November 26, 1919. The building was completed, and dedicated June 6, 1921. The new academic hall cost $690,500 which is a little over eight million dollars in today’s currency. Dr. Brown Ayers, who had conceived the new building and guided it into being died before the building was completed. President Harcourt Morgan, who succeeded Ayres as President, recommended the building be named to honor Ayres. The Board of Trustees agreed and the new building which crowned The Hill became Ayres Hall.

One interesting bit of trivia related to The Hill surrounds the plaque attached to the Cumberland Street entrance. Chicago Ornamental Iron Works was commissioned to design a plaque for the new building. It was to contain a raised likeness of Old College and of Dr. Ayers. Also listed were several names connected to the construction of the new edifice. Several changes were made in the original design submitted by the Chicago firm, but at last President Morgan approved the final design. However, when the plaque was delivered, Dr. Brown Ayres name was spelled “Ayers.” It is unknown why the University did not insist the error be corrected, but the plaque was attached to the building entrance and has remained there for 98 years. The name of the man in whose honor the building was named is misspelled.

While the preservation efforts for Old College were in full swing, a competing fund raising effort began. Several influential people in Knoxville felt the University needed an athletic field. Col. W.S. Shields was President of Knoxville’s City Bank. As well, he was a member of the University Board of Trustees and also a member of the Building Committee for Ayres Hall. While the Alumni Association was trying to raise funds to preserve Old College, Shields led in a campaign to create an athletic field. The goal for the athletic field was $35,000. The money was raised in one week. Shields contributed $23,000. When Old College was demolished, 15,000 cubic yards of dirt was graded from the top of The Hill to make way for Ayres Hall. This dirt was moved to the proposed site of the new athletic field. In April, 1921, faculty, staff, and students spread the dirt from atop The Hill to create Shields-Watkins field.

The field was named to honor the principle benefactor and his wife. The field is now surrounded by Neyland Stadium, the fifth largest college stadium in the Nation.

Robert Neyland became Tennessee’s football coach in 1926. Shields-Watkins field was 5 years old. Bleachers had been installed on the west side of the field that could seat 3,200. Neyland immediately noticed something. There is a checkerboard design in the tower of Ayres Hall. In those days, the tower was clearly visible from the football field. When his team had the ball, headed toward the north end zone, Neyland would encourage them to “Run to the checkerboard!” He also urged them to “Charge the checkerboard!” Doug Dickey became the coach of the Volunteer team in 1964 and decided that the design in Ayres Hall would become the design in the Neyland Stadium end zones. Now, when the team is headed in either direction, they can, “Run to the checkerboard!” The checkerboard design is also visible at the end lines of the basketball court in Thompson Bowling Arena. The design has also been incorporated into the exterior of the new Student Union Building.

Old College was demolished after 91 years of use. In 2008, Ayers Hall had been in use for 87 years. No thought was given to its removal, but it was in desperate need to repair and updating. In that year a twenty-three million dollar renovation project began. It was completed in 2011. The renovation maintained the building’s grand architectural design and added one noticeable feature to the exterior of the building. The original design envisioned clocks in the tower of Ayres Hall. They were not installed due to a lack of funds. Now, almost one hundred years later, the clocks are in place. Their addition enhances the beauty of Ayers Hall.

It is hoped this brief glimpse into the always fascinating history of the University of Tennessee, will deepen your appreciation for the University, and the Hallowed Hill on which it stands where “The stately walls of Old U.T. rise glorious to the sight.” 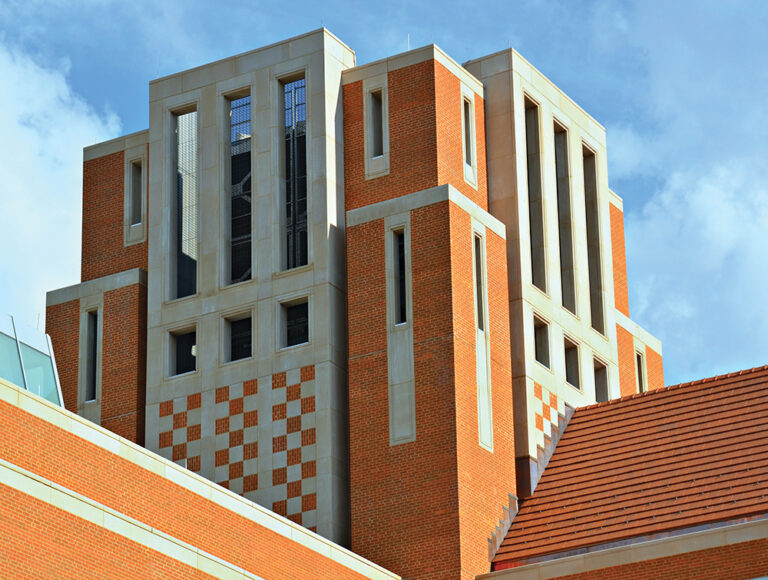